Marianne Williamson serves an useful—make that important—role in the Democrats’ quest for a viable 2020 presidential candidate. Really. I say that while ducking brickbats on Facebook and taking in the news media coverage of her “wackadoodle,” “airy-fairy,” “love-is-all” statements during the first two debates.

I said it in 2012, too, about the Occupy Wall Street movement, which was described as a bunch of scruffy, unemployed slackers with no political skills. I was right then, too—OWS played a significant role in focusing political discourse in that election on the widening gap between the one-percenters and the rest of us.

My totally unscientific and superficial estimate is that 80 to 85 percent of the mainstream media reacted to Williamson’s debate performance with disdain, ridicule or a big guffaw. That’s how the media reacted to Donald Trump in 2016, right up until the electoral votes were tallied on Election Night. (I’m not even hinting that Williamson should, or could, be elected—so hold that brickbat.) They should learn from that experience—and from Williamson—rather than repeat the mistake. 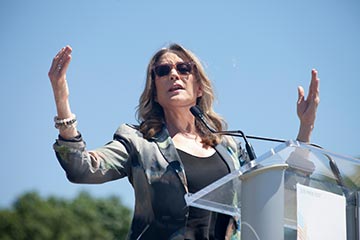 Who the heck is Marianne Williamson?

Why was she on the debate stage (albeit closest to the curtains, because of her low polling numbers) with nine other politicians on July 30th, Day One, Round Two of the debates. Williamson, 67, scolded the other candidates for the “wonkiness” of their 10-point policy plans that fail to address the racism and “collectivized hatred” at the base of President Donald Trump’s policies and campaign themes.

“This is part of the dark underbelly of American society, the racism, the bigotry. And the entire conversation that we’re having here tonight — if you think any of this wonkiness is going to deal with this dark psychic force of the collectivized hatred that this president is bringing up in this country, then I’m afraid that the Democrats are going to see some very dark days.”

The Twitter-sphere and the punditocracy lit up. Apparently so discombobulated by the concept of “dark psychic forces,” most talking heads couldn’t focus on the reality of her message that Democrats have to counter Trump’s ability to harness “collectivized hatred.”

Marianne Williamson Won the debate and we’re probably all doomed, was the headline in the Los Angeles Times. Marianne Williamson isn’t funny. She’s scary., according to vox.com.  Republicans, wrote the New York Times, are gleefully “propping up” Williamson. They  focused on her lack of political experience and her unorthodox background—celebrity self-help guru, author of best-selling New Age books, and spiritual advisor to Oprah—to disparage her legitimacy as a candidate. She has “zero chance” of being the Democrats’ nominee. (Never mind that’s true of 15 of the current 20 people running.)

The public’s favorable reaction (she was the Number 3 most-searched topic on Google during and after the debate and that—after all—is this era’s ultimate measure of the zeitgeist) suggest that Williamson touched a vein of yearning among voters that goes deeper than the horse-race-oriented analysis of political pundits. Yearning, like rage, is hard to measure, graph or outline in a policy plan, so candidates and columnists alike act like it doesn’t exist—only to be surprised on Election Night.

A few did get the message. Dana Milbank, columnist for the Washington Post, took note immediately. While acknowledging Williamson’s less than long-shot chances to win the Democratic presidential nomination, recognized the validity of her observations and her “cut-the-crap sensibility.”

“She seemed to grasp what others on the stage didn’t as they argued over small differences. As Trump proved in 2016, voters don’t much care about 10-point policy plans — what Williamson calls “wonkiness” — nor even about whether a politician’s promises are realistic. They like candidates who speak plainly and passionately.” (You may not be able to access Milbank’s column; the Post has a paywall.)

Williamson is right about Trump

David Brooks, the once-conservative columnist for the New York Times, got the point, too.

“The Democrats have not risen to the largeness of this moment. They don’t know how to speak on this level. They don’t even have the language to articulate what Trump represents and what needs to be done. … It is no accident that the Democratic candidate with the best grasp of this election is the one running a spiritual crusade, not an economic redistribution effort.

“Many of her ideas are wackadoodle, but Marianne Williamson is right about this: … We’ve never dealt with a figure like this in American history before. This man, our president, is not just a politician; he’s a phenomenon. And an insider political game will not be able to defeat it. … The only thing that will defeat him is if we have a phenomenon of equal force, and that phenomenon is a moral uprising of the American people.”

The same debate is taking place on my Facebook page.

“To me, she is no different than Trump,” groused a friend. “A con. Wanting to sell books. … Excuse me, but if people have to google to find out who she is, I’d say we gave her and her ‘dark psychic force’ their 15 minutes of fame. Stop. Stop with the coverage of unqualified con-artists.”

Another friend countered: “She certainly should not be president; she’s unqualified. But shouldn’t a voice such as hers be lifted, especially in this angry, angry time? I think so. She confidently gives the other candidates and those Democrats listening, food for thought about deepening the conversation.”

Donald Trump is all about visceral feelings. Hillary Clinton’s campaign was all about intellect—if she has a heart, she rarely let it show as a candidate. Granted, few candidates possess the ability to do both. Barack Obama is one. Ronald Reagan was another.

Trump appeals to the fears of Americans. Williamson challenges Democrats to make a credible appeal to their yearning for security, stability and inclusion—to put their plans and policies in the context of a bright, not dark, future.