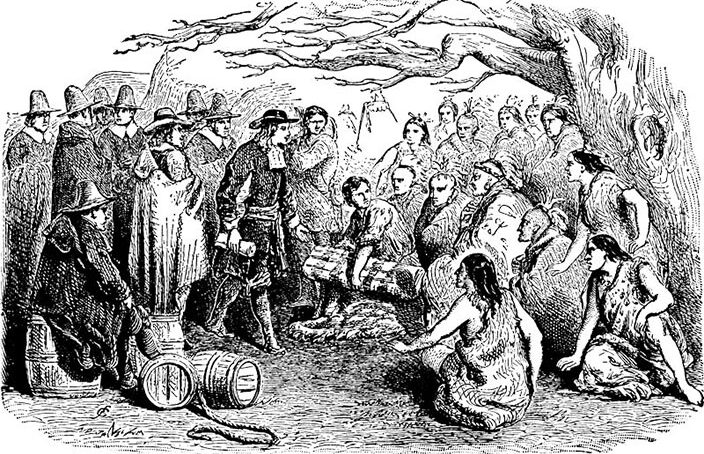 During his time as Attorney General of Pennsylvania, Benjamin Chew served as secretary of the Council on Indian Affairs and wrote a detailed account of the historic negotiations for the Treaty of Easton in his “Journal of a Journey to Easton.”

In a series of hearings between 1756 and 1762, the council was tasked with reviewing complaints the Delaware Indians (also called the Lenape Indians) made about the controversial Walking Purchase of land by William Penn’s descendants.

In 1737, the Penn family claimed 1.2 million acres of land – roughly equivalent to the size of Rhode Island – across what is now Pike, Monroe, Carbon, Schuylkill, Northampton, Lehigh and Bucks counties. The previous year, the family produced a deed from 1686 that said the Lenape’s promised to sell a piece of land near modern Easton, Pennsylvania, that extended as far west as a man could walk in a day and a half.

The Lenapes agreed to this, assuming the distance would only be about 40 miles. However, Provincial Secretary James Logan hired three of the fastest runners in the colony to “walk” the route and that’s how the “Walking Purchase” ended up being far greater than the Lenapes anticipated.

The Walking Purchase of 1737 had a great impact on the relationship between the Native Americans and the colonists. In October 1758, Benjamin Chew was sent there to document The Easton Conference as the two sides tried to resolve their conflicts.

In his duties as council secretary, Benjamin produced a report that included the affidavits, depositions, copies of deeds, maps and surveys that were cited as evidence during the hearing. It also included a report of Delaware chief Teedyuscung’s complaints and documents related to the Seven Years’ War and the violence that led up to the treaty hearings.

Benjamin’s accounts provided a very comprehensive view of The Easton Conference, according to the council.

In 2004, the Delaware Nation and its 21st century descendants alleged there was fraud in the Walking Purchase and sued Pennsylvania in an attempt to claim 314 acres of land that was included in the purchase. However, the U.S. District Court dismissed the case as “nonjusticiable.” The ruling was upheld by the United States courts of appeals despite several appeal attempts and the Supreme Court of the United States refused to hear the case.