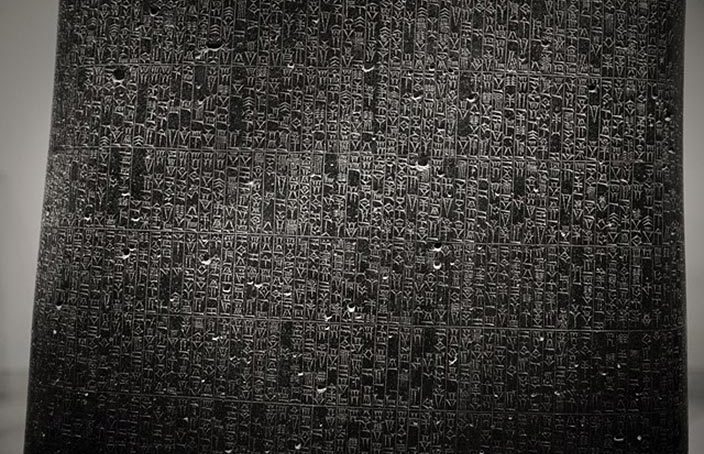 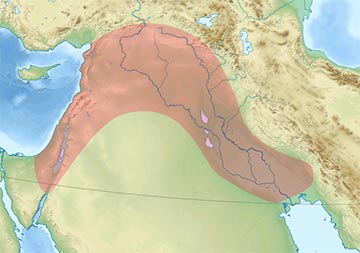 The Fertile Crescent is the area between the Tigris (right) and the Euphrates (left) rivers.

Glowing and gliding from the Persian Gulf into the land bridge between the Arabian Peninsula and the Middle East are the two rivers to which human civilization owes its magnificence: the Tigris and Euphrates. It is between these two rivers, in this Fertile Crescent of lush green fields surrounded by arid mountains and harsh desert, that the Cradle of Civilization gave rise to the domestication of the staple crops – wheat, einkorn, barley, flax, chickpea, pea, lentil, and vetch – and the staple beasts – sheep, cows, goats, and pigs. It was here, too, that human initiative bred remarkable advances in math, science, language, culture, and the Rule of Law.

The collection of municipalities that settled here, those that went on to jumpstart the opening chapters of human history, are today collectively referred to as the Mesopotamians. On the ground, however, each of these tribes went by a different name. Of the dozens of tribes that dotted the area, one in particular would give birth to an idea so compelling that it laid the groundwork for a future built on the Rule of Law.

Into the ancient city-state of Babylon was born King Hammurabi in the year 1810 B.C. Hammurabi, son of Sin-Muballit, had one goal upon his ascension to the throne: expand the power and influence of Babylon throughout Mesopotamia.

By the time of his death in 1750 B.C., Hammurabi will have accomplished his goal and united all of Mesopotamia under Babylon. He will go down in history as a terrific statesman and an even better general. But with the discovery of a 7-foot basalt pillar in Susa, Iran by a team of French archaeologists in 1901, Hammurabi cemented his place in history as being one of the first humans ever to establish a written code of laws.

The Code of Hammurabi is estimated to have been started in 1754 B.C. and completed by 1750 B.C. Inscribed in a black basalt slab over 7 feet tall and in the shape of a giant index finger, the Code was created to bring the Rule of Law to a land where justice had for centuries been dictated either by the stronger side in the conflict or by the King himself. In the words of the monument, it was created ”to prevent the strong from oppressing the weak and to see that justice is done to widows and orphans.” At the top of the basalt slab is an etching of Hammurabi receiving the code of laws from Shamash, the Babylonian god of justice. 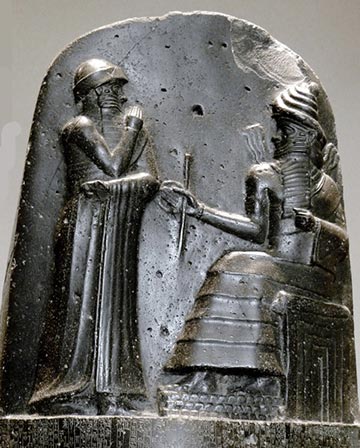 King Hammurabi receives the Code of Laws from Shamash, the Babylonian god of justice.

The Code of Hammurabi contains 282 laws spread over 28 paragraphs and 44 columns. It covers a variety of topics to which justice may need be applied: slander, trade, slavery, the duty of workers, theft, liability, and divorce. Most scholars contend it is unfair to call the Code a set of legal principles for it is more a set of precedents that dictated everyday life, a primitive constitution. For example, if someone stole an ox, he or she would have to pay back its value times 30. The fee for a doctor healing a severe wound would have cost 10 shekels. In any transaction, the seller must have issued a receipt, and the buyer must have paid the amount in full. The seller must have then issued the buyer a receipt of payment. If someone was entrusted to build a dam, and the dam failed, then the builder would have to pay restitution to the man who hired him. If someone accused someone else of wrongdoing, they would have had to provide evidence of the crime or be held themselves on charges of sedition.

Specific fines and punishments were also outlined in the Code, some of which may have been extreme according to today’s standards. “An eye for an eye,” for example, is one of the punishments outlined by the Code. Others involved cutting off tongues, arms, breasts, and ears. As inhumane as some of the punishments could be, the Code of Hammurabi was also the first written set of rules wherein the accused party was presumed innocent until proven guilty.

The Code remains one of the most important monuments in world history. The idea that an entire society could be dictated by a set of written laws was novel at this point in the history of Law. Historians continue to debate, however, whether these laws came from the realities of Babylonian life or whether they came from the opinions of Hammurabi. Did the law stem from the people or from the sovereign? The answer remains elusive, as the amount of information regarding daily Babylonian life is scarce. Regardless, the fact remains that the Code was one of the first times in history an average person could point to an established rule and argue his or her defense on behalf of it.

8 Things You May Not Know About Hammurabi’s Code