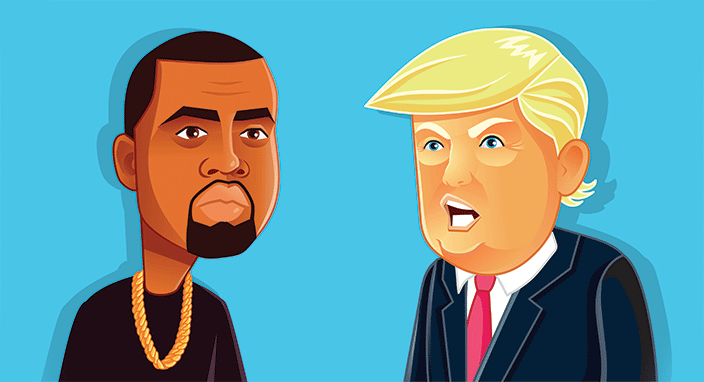 On July Fourth, popular music artist and fashion designer Kanye West announced his 2020 presidential campaign over Twitter. However, within ten days he had supposedly dropped out of the race. As of July 16, according to the Federal Election Commission, Mr. West was again an official candidate.

Kanye West’s interest in politics seems largely connected to President Donald Trump. Their friendship began to publicly develop over social media in 2016 when the two frequently met, and tweeted reciprocating support for one another. In April of 2018, Kanye West tweeted, “You don’t have to agree with trump, but the mob can’t make me not love him. We are both dragon energy. He is my brother. I love everyone. I don’t agree with everything anyone does. That’s what makes us individuals. And we have the right to independent thought”. Later in 2018, Kanye was photographed in the oval office sporting a MAGA hat with President Donald Trump.

However, in a 2020 Forbes interview conducted to question West about his presidential campaign, West stated that he doesn’t support Trump anymore and that he was “taking the red hat off,” in reference to the MAGA hat.

There is large speculation as to why West used his platform to pivot towards politics, even if it was just for a moment. It is also worth questioning whether or not Kanye West himself filed the Statement of Organization and the Statement of Candidacy with the FEC, as it appears that just about anyone can file these two statements considering that the FEC doesn’t appear to verify the legitimacy of information in these types of filings. Because of this, technically Mr. Kanye West and 1144 people are also in the race. Essentially, the filing of these forms is negligible, and does not ensure a legitimate presidential campaign.

Whether or not Kanye West’s filings with the FEC were legitimate or not doesn’t denounce his initial interest in running for presidency. He was public about his intention to run, and clearly developed a relationship with the current president of the United States. The question remains more along the lines of why? What were Mr. West’s intentions? Although there is no direct statement from Mr. West, his fan base largely believes that it was a stunt to gain more following for his impending album drop. Mr. West’s family, on the other hand, believes that his behavior is a result of his ongoing struggle with mental illness, and that he is suffering from a bipolar episode.

It is a curious event in our country’s history indeed—that a tumultuous individual like Mr. West was able to cause such a ripple in the political arena. Many young democrats expressed serious concerns that, given Mr. West has a successful campaign, the outcome of the election would break up the voter base for Biden, rendering Mr. Trump as President once again. Some go so far as to believe that this was a stunt put on by the Republican party to help Trump advance. Regardless of these conspiracies, Mr. West’s campaign exposed some holes and some strengths in our presidential selection system. Whether or not officials at the FEC are going to take this experience as a learning curve remains to be seen.