A Virus Inside and Out

During my first, brief marriage in my twenties, Truman Capote, a friend of my father in law, telephoned, and in his froggy voice, asked if my husband and I wanted to go with him to Studio 54. I was immersed in my work as an MFA student in poetry, at Columbia’s School of the Arts, and I explained I had too much work on my desk. So I’ve always been a bit of a recluse.

Ten years ago, I “left the Mother Ship,” as a poet friend of mine puts it, gave up my tenured position at Rhodes College in Memphis, and moved to Western North Carolina. Eventually, after driving to over fifty houses, I found a cabin on the side of a mountain, surrounded by woods, at the end of a dirt and gravel drive. In the dark, when I first moved here, getting out of the car at night, I was overwhelmed by the presence of the hundred foot poplars, cushioned by pines, hickory, scarlet oak. The cabin is on a flat space, literally cut out from the side of the mountain, so it sits on a shelf of land, with a forty foot cut bank arcing up behind it. That cut bank is a path for bears, deer, who follow its edge because the woods end at the cut bank.

I have a virus, which causes Chronic Fatigue Syndrome, recently renamed Systemic Exertion Intolerance Disease. It has no biomarker. I first came down with symptoms during the qualifying exams for my doctorate at Temple University. I have an iron will, and I knew my immune system was compromised, but I forged ahead. About ten years ago, the illness intensified, and five years ago, after spending the summer hiking and taking two to three hour walks, I couldn’t get out of bed. But on one of those walks to the reservoir, which verges on National Forest, I saw a snapping turtle two feet long from extended head to tail. I wanted to see bobcats and mountain lions on my hikes. But I do see bears; one a tiny cub, small as a puppy, rappelled down the side of our compost bin.

This morning, I took the walk on flat ground, to the hairpin turn in the driveway, back and forth, because I am no longer allowed to walk the steep slopes of the mountains or the lower parts of the drive we live on. Every morning I see the microcosm, the second pink clematis that flowers weeks later than the first, the inch wide nascent buds, like tiny bouquets, that will open into bunches of hydrangea, a ladybug on its leaves, the Fire Pink that grow wild along the driveway. I check the seedlings of cucumber, pepper, tomato, for eaten leaves, the crocosmia for mildew, the rose and iris for aphids, and delve into the supply cupboard built onto the back of the cabin. Inside it are my sprays for bugs, but also a pile of snakeskins found outside the walls of the cabin. 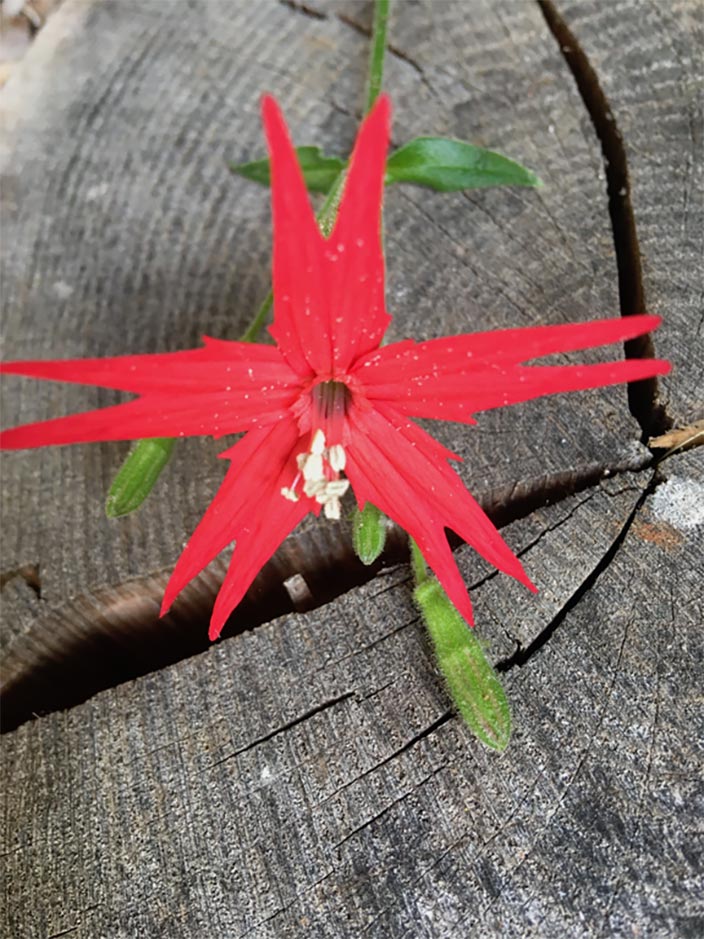 My husband and I have a system for killing a copperhead. We’ve found them in the woodpile, and in the stonewall of raised beds in the back of the cabin, where heat gathers on the graveled area around the beds. I pinch the head with a snake tong and my husband lobs off the head with a shovel. I transfer both head and body into a bucket. But you can’t go near the head; it won’t die, buried at the edge of the driveway, for hours, and it’s hinged jaw can still bite. 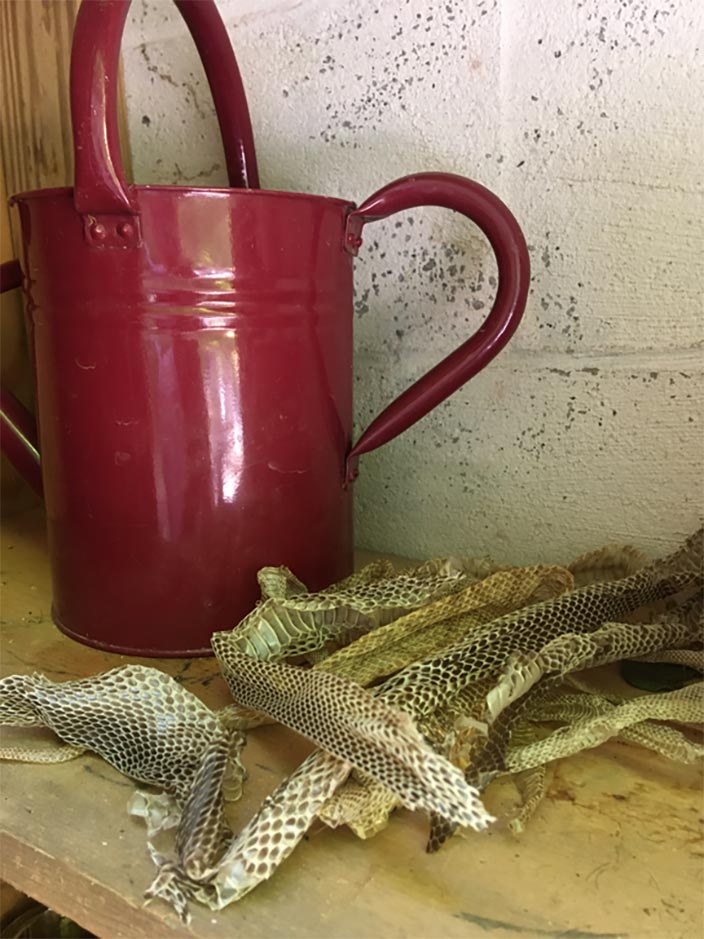 Despite the challenges of fallen power lines sparking, bears thumping over the compost bin, mice, and copperheads, I love it here. I hear wild turkeys as they make their different sounds, wrens and redbirds, the neighbor’s rooster across the holler, the streambed running with water so clear you can hardly see it as it goes over the rocks. Wild iris crowd the swales that run water downhill into the stream bed. Outside there is a pandemic, in the macrocosm, and inside the microcosm, I contend with injections, liquids, and capsules I take as protocols for my own virus, but if I focus on the natural world, I am saved. 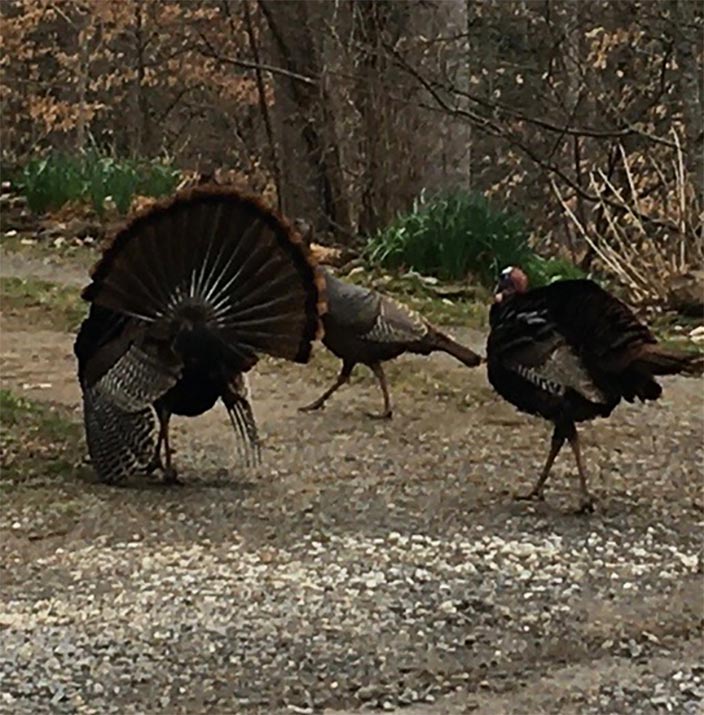 Turkeys in a Mating Dance by Tina Barr

Tina Barr has lived with CFS since 1989; her book, Green Target, about her life in the cabin, won the Barrow Street Press Poetry Prize and the Brockman-Campbell Award. www.TinaBarr.com