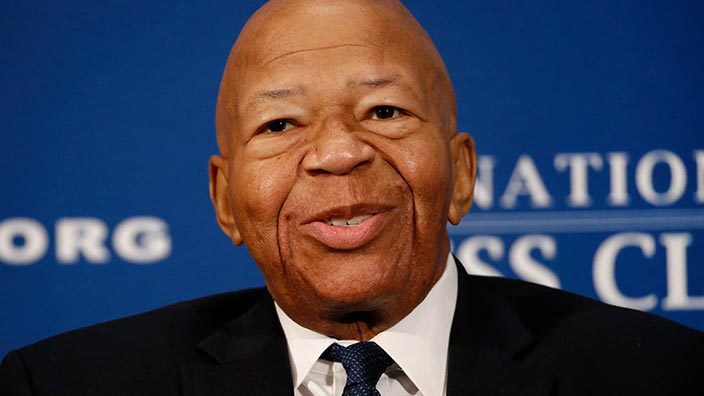 “We are in a fight for the soul of our democracy”

Congressman Elijah E. Cummings—who “never wavered, never faltered, and never took one step backwards in his defense of the Constitution and the rule of law”—died Oct. 17 of complications from a variety of illnesses. He was 68.

His was one of the country’s most respected voices, consistently raised in calls to our better nature. In a column in the Washington Post, Speaker of the House Nancy Pelosi—a fellow native of Baltimore—called Cummings “our North Star,”

“He was a leader of towering character and integrity, who pushed the Congress and country always to rise to a higher purpose, reminding us why we are here. As he said whenever he saw that we were not living up to our Founders’ vision for America and meeting the needs of our children for the future: “We are better than this.”

“He used his gavel to restore integrity, accountability and honesty to Washington so that government would be a force for good for working people, ensuring that all could experience the American Dream as he did,” Pelosi wrote. In his role as chairman of the House Committee on Oversight and Reform, Representative Cummings was a powerful and vociferous critic of President Trump.

In closing statements after testimony by President Trump’s former lawyer, Michael Cohen, Mr. Cummings asked what was, for him, a perennial question:

“When we’re dancing with the angels, the question will be asked, “In 2019, what did we do to make sure we kept our democracy intact?”

He returned to that question in an impromptu gathering outside House chambers, his remarks posted in a video by his sister-in-law. “Did you stand up, did you holler, did you scream, what did you do? …”

Funeral services for Rep. Cummings are scheduled for Thursday and Friday in Washington, D.C. and in Baltimore, which he represented in Congress for nearly four decades.

What Elijah Cummings Once Told Trump in Private, The Atlantic