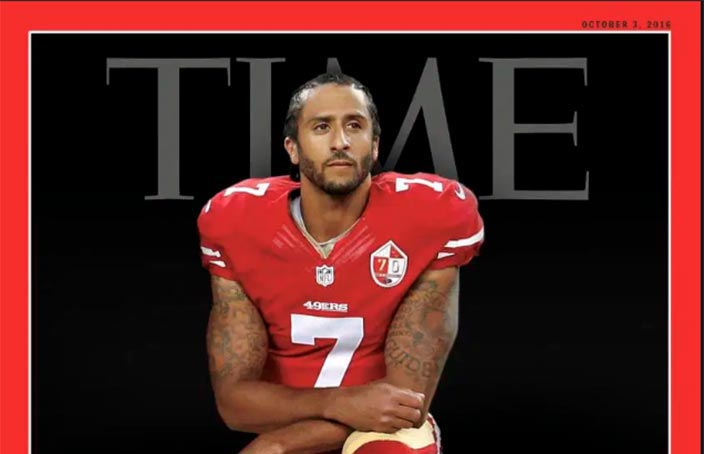 Senate Majority Leader Mitch McConnell vows to block removal of Donald J. Trump from office, if the House of Representatives votes to impeach the president.

“The way that impeachment stops is a Senate majority with me as majority leader,” McConnell says in a recently launched fundraising campaign. He may be right—twenty GOP senators would have to defect from the party line for the Senate to reach the 67 votes needed to remove Trump from office.

Fat chance of that happening, according to the nation’s chattering classes of pundits and politicians. McConnell controls committee assignments, choice pieces of legislative pork, and two multi-million-dollar super-PACs senators depend upon for their re-election efforts. Defy him at your peril.

But I sense a few chinks in the solid red wall McConnell has assembled in the Senate, with his 53-member majority. I wouldn’t even be surprised, if it comes to a Senate trial, if McConnell votes for Trump’s removal himself on charges of asking foreign countries to investigate the son of one of his political rivals. 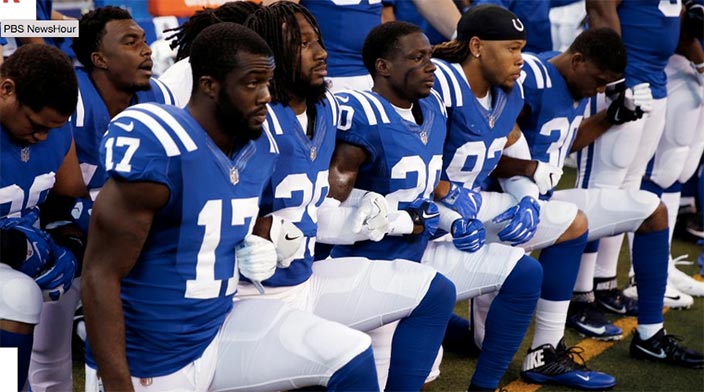 Call it the Colin Kaepernick Effect.

The quarterback of the San Francisco 49er’s started a lonely protest in the 2016 pre-season, kneeling during the national anthem to protest police brutality against minorities. By the start of the 2017 season, his “take-a-knee” movement had spread throughout the National Football League—bolstered by caustic remarks by President Trump. The following year, basketball and baseball players were taking a knee before their games, too.

Simply put, a “first follower” is the person who helps turn an idea into a movement. Without that person and the next few followers, a brilliant idea may go nowhere. Or, as entrepreneur Derek Sivers put it: “The first follower is what transforms a lone nut into a leader.”

Sivers outlined the concept of first followers in a vivid Ted Talk,“How to Start a Movement.” In the 2010, three-minute video, he demonstrates the significance of a movement’s first few followers—“underestimated leaders in their own right.”

The video begins with a shirtless young man dancing wildly on a hillside where other people are picnicking. A few seconds later, another young man runs up and begins dancing. The first dancer embraces the second and they keep dancing. Then a third joins in. “Three is a crowd and a crowd is news,” says Sivers.

Heads turn, more people run to join the dancers—“They’ll be ahead of the crowd, if they hurry,” notes Sivers. Within three minutes, everyone on the hillside is dancing. At this point, not joining would just be humiliating. 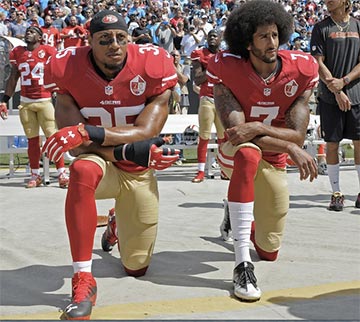 Could the same thing happen in the Senate on impeachment?

Admittedly, the Republican majority in the Senate would be a tough audience to recruit. GOP senators rarely defy an edict of The Leader, as they call McConnell. Even when he had only a majority of 51 to 49, McConnell lost only one big vote, when Senators Lisa Murkowski (R-Alaska), Susan Collins (R-Maine) and John McCain (R-Arizona) broke ranks in 2017 to save the Affordable Care Act.

I’d say the vote on the ACA was the result of the Kaepernick Effect. Murkowski and Collins announced their intentions to vote against repeal of the ACA early on. They only needed one follower to block the repeal. McCain joined their party at the last minute—a vote I don’t think he would have cast if he had been the lone defector.

The Kaepernick Effect is already in play in the impeachment drama, kicked off by a complaint by an anonymous whistleblower. Trump, said the whistleblower, is seeking election help from the Ukrainian president, while withholding $400 million in Congressionally approved military aid to the country. Ten days later, a second whistleblower came forward to reinforce the allegations. Let’s see if that “first follower” is joined by others.

Kaepernick’s take-a-knee movement started slowly, little noticed by the press or anyone else. Then he found his first follower in 49ers’ safety Eric Reid. A few other players joined them. 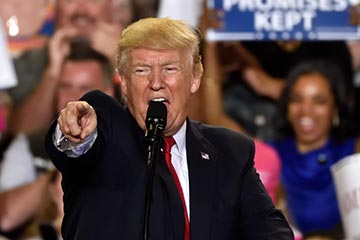 It wasn’t until Donald Trump took note in the spring of 2017 and insisted at a political rally that the football players were disrespecting the flag. Trump kept up his disparagement all that year and into 2018, shouting at one point: “Wouldn’t you love to see one of these NFL owners … say ‘Get that son of a bitch off the field right now. Out! He’s fired! He’s fired!’”

Trump ’s remarks did activate his core voters. But he also pushed Kaepernick’s actions into a full-fledged movement, with players, coaches and owners taking a knee. Not joining became unthinkable.

Typically, the president amped up his criticism—and threatened NFL owners. The Wall Street Journal reported that Trump “scared the bejesus” out of the owners, warning them that the NFL protests were “a very winning, strong issue for me. Tell everybody, you can’t win this one. This one lifts me.”

Trump is following the same playbook to avoid eviction from office.

The president and his inner circle are exhausting the stock of cliches — “going all out,” “doubling down,” “riding hell for leather”—needed to describe their assault on the impeachment effort. They’ve called it a “coup d’etat,” accused House Democrats of treason, and deflected, defended and denied facts in every way possible, in their efforts to maintain and enforce GOP unity in the Senate in the event of an impeachment trial.

And, just as in the football skirmish, Trump not only didn’t deny asking Ukraine for election help. He called for China to investigate his supposed Democratic rival, too—in a press conference. (The U.S. Constitution prohibits foreign entities from intervening in an election.)

“Where is the line? When are you guys going to say, ‘Enough’ and stand up and say, ‘You know what, I’m not backing any of this’?” asked Amy Haskins, of Manning, IA. “You still stand there, silent. And your silence is supporting him…”

It’s probably too soon to look for GOP first-followers.

Only three Republican senators are on the record condemning Trump for soliciting Ukrainian and Chinese help in his 2020 election bid.

All three—Collins, Utah’s Mitt Romney and Ben Sasse of Nebraska—were reticent when the allegations about Ukraine were first raised. When Trump  asked China as well to investigate former Vice President Joe Biden’s son, the three felt compelled to speak out publicly.

Romney’s response was immediate and severe: 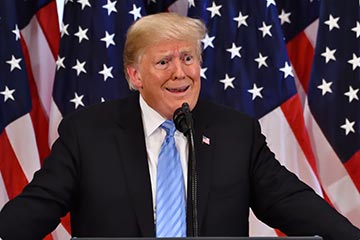 “By all appearances, the President’s brazen and unprecedented appeal to China and to Ukraine to investigate Joe Biden is wrong and appalling. When the only American citizen President Trump singles out for China’s investigation is his political opponent in the midst of the Democratic nomination process, it strains credulity to suggest that it is anything other than politically motivated.”

Sasse, up for re-election next year and a sporadic Trump critic, weighed in a day later, in a statement to the Omaha World-Herald:

“Hold up: Americans don’t look to Chinese commies for the truth. If the Biden kid broke laws by selling his name to Beijing, that’s a matter for American courts, not communist tyrants running torture camps.” Sasse may have mollified the president by criticizing the House impeachment inquiry, calling it a “partisan clown show.”

Two days later, Collins—who is in the unfamiliar position of running in a tight race for re-election—became the third Republican senator to publicly criticize Trump. In an interview with the Bangor Daily News, she rebuked Trump for actions that were “completely inappropriate.”

Too soon to tell. It’s easier to make a statement than it is to cast a vote. Romney and Sasse, both vote Trump’s way 86 percent of the time, according to the statistical website FiveThirtyEight.com.

Collins is one of the few GOP senators considered to be moderate. She votes in line with Trump 68 percent of the time. But on big votes, with the exception of her opposition to repealing the ACA, she known for saying one thing, then voting however Mitch McConnell wants her to vote. If she voted with her publicly stated positions, says FiveThirtyEight, she would only vote pro-Trump positions 45 percent of the time. 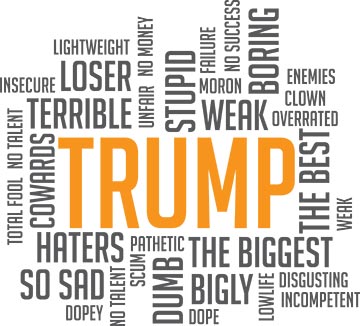 Opposing Trump is dangerous. He wields his Twitter account with Zorro-like brutality. The day after Romney’s criticism, the president called him a “pompous ass” and a “fool” who “begged” Trump to endorse his Senate campaign. Romney, said Trump, should be impeached. (Senators can’t be impeached,)

Trump’s jibes provoked his followers to deluge Romney with Twitter abuse—he and other critics have been called “garbage,” “spineless sellouts” who are “stabbing Trump in the back.” Anyone considering a critical comment—while depending on Trump’s support in their own district—recognize those responses as explicit warnings.

“Everyone talks about the need for great leadership, in public office, business and our personal lives,” says Sivers. “But hardly anyone talks about the value—the necessity—of followers. Without first followers, a movement never comes to life. They have the courage to follow and show others how to follow.”