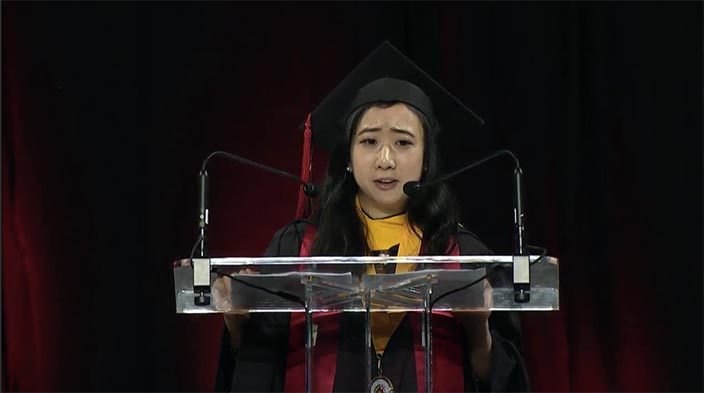 Chinese University of Maryland student Shuping Yang recalled her first experiences in America during her commencement speech, much to the dismay of her native peers. 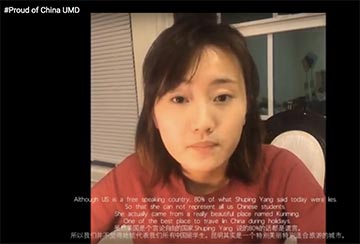 “The moment I inhaled and exhaled outside the airport, I felt free,” she said in a poetic play on the difference in pollution levels, and Freedom of Speech, between her new American city and her old Chinese one. “No more fog on my glasses, no more difficulty breathing, no more suppression.”

“I have learned that the right to freely express oneself is sacred in America,” she continued, saying democracy and Free Speech are “fresh air worth fighting for.”

Yang, applauded by some of her peers, was met with harsh criticism from some fellow Chinese students, both at UMD and at home.

#Proud of China UMD, a compilation of Chinese students refuting Yang’s claims, went viral on YouTube shortly after her speech. Students rose to defend their homeland, describing what makes them proud of China’s culture and debunking Yang’s claims. One student went as far as to say that “80% of what Shuping Yang said today was deceptions and lies.”

Yang also faced scorn on social media with several Chinese peers suggesting she not return to China. According to Campus Reform, one Twitter use said, “As a Chinese if you don’t like and respect your own country then get out of our country please. We don’t need any trash in China. Shuping Yang you’re full of lies and you have made our Chinese students ashamed.”

The university issued a statement to quell tensions, suggesting every student has a right to share their viewpoint. According to The New York Times, Yang has responded to criticisms by saying her intention was not to belittle China, but to share her own experiences as a college student in America.