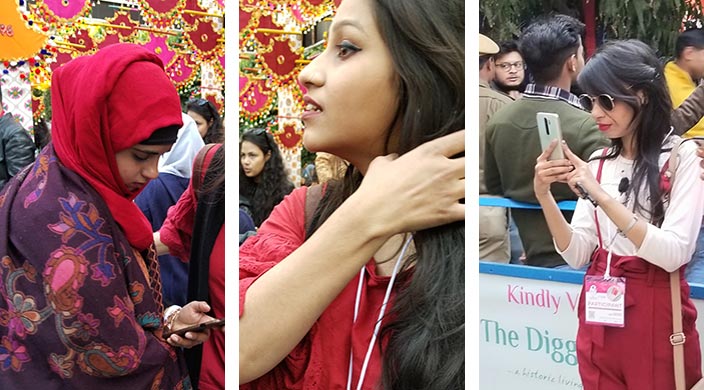 Except when it wasn’t.  Then it was more like—oh, I dunno—Disney World on high school graduation night? ComicCon without (mostly) the cartoon characters? Or, as I dubbed it, Selfie Alley.

Organizers describe the Jaipur Literature Festival, now in its 14th year, as “the greatest literary show on Earth” and “a sumptuous feast of ideas.” But, like many Hindu gods, the festival displays multiple personalities. How you experience it is partly (maybe mostly) a function of your age and station in life. In short, the JLF is a spectacle and the place to be seen—whoever you are or whoever you want to be—for five days every January.

This year, some 300 literati converged to lead panel conversations on topics ranging from the changing face of digital narratives to the life of Lucian Freud to Brexit to the leadership style of Akbar, the greatest of Mughal rulers. These panel discussions, led by notable authors, journalists, poets, critics and assorted experts from around the world, attract an equally international crowd of notable-or-not authors, journalists, poets, critics and assorted bystanders interested in literature, publishing, history, politics and free speech.

When all that thinking grew tiresome, there were entertainment opportunities — a fashion show, cocktail parties, musical interludes and morning yoga. My favorite, conceptually speaking, was an “immersive, virtual reality installation” by the Goethe Institut , featuring an adaption of Franz Kafka’s “Metamorphosis.” It was billed as “Ibsen Hindi Translation Launch.” I say it was my conceptual favorite because I missed it. Therefore I cannot enlighten you on the connection between Goethe, Ibsen and Kafka in English, Danish, German or Hindi, or even whether those languages or topics arose. 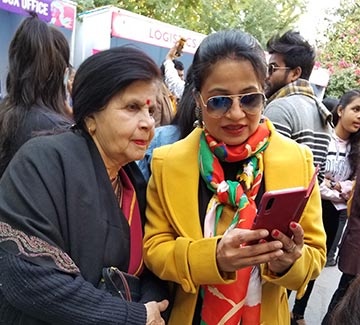 All ages indulge in selfies. Photo by Susan Caba

Of course, there has been drama over the years. In 2012, author Salman Rushdie abruptly pulled out of the festival, after being warned of an assassination plot in response to his by-then 25-year-old novel, “Satanic Verses”

And in 2015, Nobel Laureate V.S. Naipaul (“A House for Mr. Biswas”) tearfully reconciled with his one-time literary disciple Paul Theroux (“Mosquito Coast”). Their 30-year friendship crashed after Theroux—peeved by his dislike of Naipaul’s second wife—published “Sir Vidia’s Shadow,” in 1998. They hadn’t spoken for 17 years.

The festival’s tents and events sprawl across and through the durbars and many gardens of the Diggi Palace Hotel, a haveli built in 1860. Descendants of Shri Thakur Saheb Pratap Singh Ji Diggi—in other words, a Rajasthani prince—still live in the mansion-slash-heritage hotel. The first JLF, in 2006, drew an audience of about 100, all of whom easily fit in one modest meeting hall of the palace.

Approximately 40,000 people thronged the Diggi’s ample pavilions, spacious gardens and elaborate audience halls over this year’s five-day gathering. Good as the speakers were, I’d guess no more than a quarter of that 40,000 were there for the brain candy. The rest were there, apparently, for Instagram.

Multitudes of young people (mostly) made their way along the Diggi’s decorated promenades, pausing every few minutes to strike a pose, snap a selfie, then re-arrange themselves like pieces in a kaleidoscope to do the same thing again. Particularly attractive backdrops required patience—first for the optimum spot to clear and second, to manage a shot without someone passing in front of your smartphone.

There’s an art to serious selfie-taking, I’ve come to realize—a process I’ll never master. It requires a portfolio of on-demand expressions, a keen eye for composition (the four people in a line selfie is so over—great selfies have depth of field), and the ability to look natural with a second’s notice. Long arms, it goes without saying, are a necessity.

Most of the selfie-takers were young, but some middle-agers indulged, too, including one author who was posing for a book cover. What, if anything, tied the two groups together—or were the selfie-posers just taking advantage of an Instagram setting? 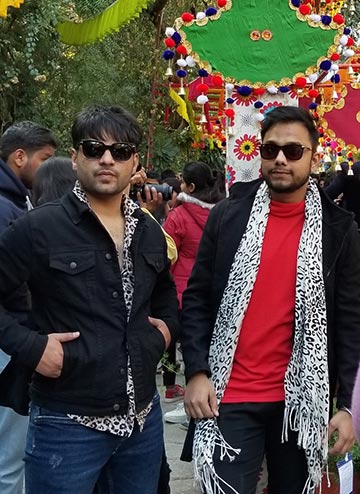 Maybe one can too many leopard prints? Photo by Susan Caba

In the end, I decided both groups were there to either express themselves or understand the world through words and images.

“At some level, every type of work, whether it is literature, poetry, music, painting, photography, sculpture, or architecture, is always a portrait of the creator. We cannot escape ourselves any more than we can outrun our shadow,” writes author Kilroy J. Oldster (“Dead Sea Scrolls”).

I wouldn’t have put selfies in the same category as literature, but portrait photographer Annie Leibowitz does. In an interview with CNN, Liebowitz—who shot Queen Elizabeth’s official portrait, as well as the Rolling Stone cover of Yoko Ono and John Lennon hours before he was murdered—said she learned a lot about herself through photographs.

“It’s the same thing with young people today, and their iPhones and cellphones. They can see themselves, see the what they look like right away,” she said. The late Ansel Adams said something similar: “A great photograph … is a true expression of what one feels about life in its entirety.”

Words or images, I’m inclined to see the literature festival as hordes of people following the advice of the late Allen Ginsberg: “Follow your inner moonlight; don’t hide the madness.”

The 2021 Jaipur Literature Festival will be Jan. 27 through Feb 1. The location hasn’t been determined.