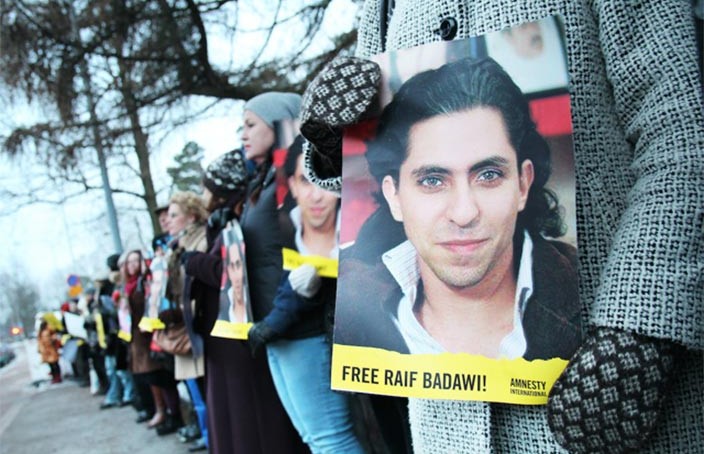 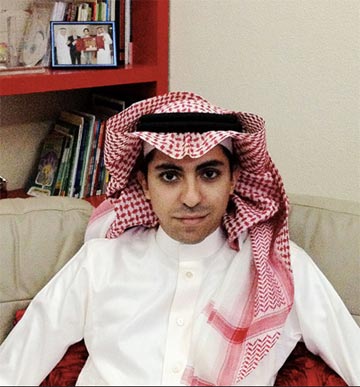 This photo of Badawi was circulated around the world after news of his arrest.

The Freedom to Publish Prize is an annual prize awarded by the International Publishers Association to “[a] person or organisation that has made an important contribution to the defence and promotion of freedom to publish.” Annual winners are awarded £7,000 along with their trophy.

Badawi, husband and father of four, was arrested in 2012 on charges of “insulting Islam through electronic channels.” In 2013 he was convicted and sentenced to a seven-year prison term that includes 600 lashes. In 2014 his sentence was increased to ten years and 1000 lashes. Badawi’s lawyer, Waleed Abulkhair, was arrested on similar charges in part for his defense of Badawi and in part for setting up the human rights organization Monitor of Human Rights in Saudi Arabia.

Badawi’s website Free Saudi Liberals is a blog that tracked human rights abuses by the Saudi Arabian government against Saudi progressives. A majority of the site’s articles told the stories of writers, reporters, and filmmakers who had been arrested for denouncing or otherwise criticizing the Saudi royal family and its practices. Badawi also confronted the state of Islamic societies around the world. One in particular questions whether an extreme view of Islam stifles creativity. Badawi claims that in extremely repressive societies like Saudi Arabia, creative, progressive minds will leave in search of a more tolerant society where their ideas can flourish.

Badawi was due to collect his award in London on Sunday, April 10. Appeals for his temporary release to attend the ceremony were made by governments around the world; all were shot down by Saudi officials. There to collect his award will be Ensaf Haidar Mohammed, wife of Badawi and champion of his message.

Mohammed was forced to move to Canada after the imprisonment of her husband. She calls on the world’s progressives to continue the fight for complete freedom of speech in all societies. She says that her husband’s prize money will be used by the Raif Badawi Foundation to campaign for his release and continue his message. Badawi continues his fight even from his prison cell. In December reports were leaked that Raif had begun a hunger strike.

Saudi Arabia is notoriously known as one of the world’s worst environments for free speech. On Freedom House’s scale of 1-7 where 1 is the best and 7 is the worst, Saudi Arabia has ranked at a hard 7 in Freedom every year since 2012.