It’s been one hell of an August.

Even before Hurricane Dorian took aim at the Bahamas, Florida and the Carolinas, politics and political news roiled the atmosphere. News bombs came in clusters, along with the mid-month Perseids meteor showers.

To top it off, four mass shootings opened and closed the month, leaving 53 people dead with not even the usual pious “thoughts and prayers” from denizens of Washington, since Congress was on its annual August break.

“In our age, there is no such thing as ‘keeping out of politics.’ All issues are political issues, and politics itself is a mass of lies, evasions, folly, hatred and schizophrenia.”

Rarely does the news get more exhausting.

In my lifetime, only the Vietnam War, the “long, hot summer” of the 1967 civil rights riots, followed by Watergate and Richard Nixon’s resignation produced news cycles this tumultuous. To tell the truth, I’ve half-joked that I’d be happy to have Nixon back in office! 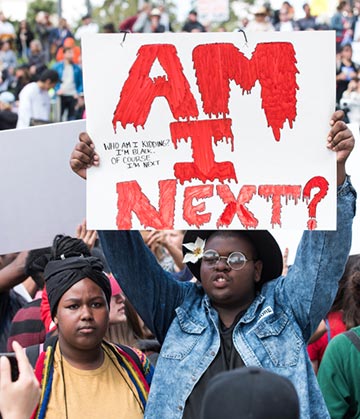 Students protest the lack of gun control in response to school shootings.

We’re feeling the stress. According to the American Psychological Association’s 2018 “Stress in America” survey, 62 percent of those survey view the political climate as a source of stress—up from 56 percent the year before. Those of the left of the political spectrum refer to “Trump Anxiety Disorder.” Those of the right—including the President—classify the anxiety as “Trump Derangement Syndrome.”

Only 26 percent of Republicans polled after Trump was inaugurated reported feeling stress from the political environment, while 72 percent of Democrats reported being stressed out by the election results. Not that Trump supporters don’t have their own anxieties—namely, criticism from friends and family who paint them as racists or fascists because they do support Trump.

Overall, according to the APA, stress levels among people of all political leanings are the highest they’ve been in a decade. And the stress is magnified by a feeling of helplessness. We’re all just tired.

Maybe we should take our cue from Cicero, the Roman stateman, who also lived in tumultuous time. “While there’s life, there’s hope,” he said. He was, of course, assassinated.