Forgive Me Father would have never been made were it not for the student housing and meal plan that came along with it. 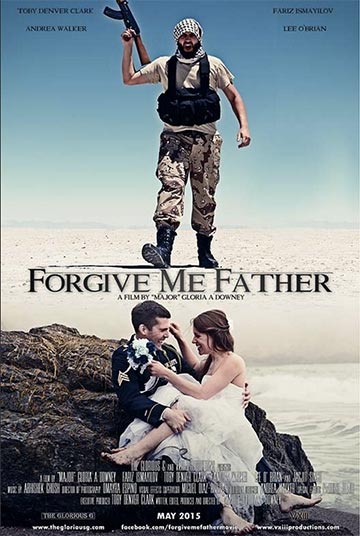 Forgive Me Father was an Official Selection at the 2016 Free Speech Film Festival.

“I was the poster child of everything wrong with the VA,” Maj. Gloria Downey says of her return home after 6 months at the heart of the American war in Iraq.

Medical care was non-existent, income was elusive, and comfort meant sleeping on the couches of those few friends kind enough to open their doors to her.

Downey’s decision to go to film school, and ultimately make Forgive Me Father, meant gaining access to the basic necessities of life. But what began as a student project turned into the exposure therapy she needed to overcome harsh memories of American injustice in Iraq.

“The title says it all. I had to get this poison out of me. I have a moral human obligation to do something about what I experienced, and this is my movie.”

A poor kid on the streets of Miami, mid-1970s, surrounded by palm trees still riveting from the latest tremors in American society, Maj. Gloria Downey grew up experiencing injustice firsthand. But it was the very circumstances she was born into, she says, that defined her life’s purpose – to grow up and liberate the oppressed, first by becoming a public defender, later by joining the judicial wing of the United States military. 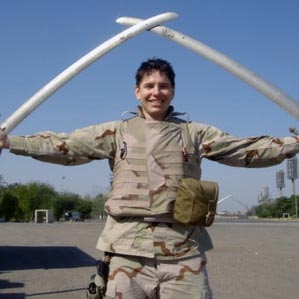 Sporting a respected uniform and basking in a chance to finally see the world, Maj. Downey made rounds across Europe before landing the one assignment that would prove tougher physically, mentally, and legally, than anything she’d experienced growing up.

Downey was one of the few in her unit who disagreed with America’s war. Since her mandatory military years were expiring just as the war was reaching its peak, she was considering an honorable discharge when she came to a stark realization. This was part of her life’s calling. She had to go.

“I realized it was the place to deliver the most justice. I trusted if [the military] were sending me to Iraq, it must be legit.”

Only once her boots hit the ground did she realize it was all a sham.

Downey quickly realized there was no functioning court within the American-influenced, Iraqi court system. Taking artillery was the norm in the Red Zone, and inside the courtroom convictions were based only on the testimony of the accused, most of whom received little to no counsel from female defense attorneys coerced into silence by societal norms.

“The court didn’t believe in physical evidence,” Downey says. “Admissible evidence could be ‘this was a man sitting near a pile of weapons, therefore he’s accused.’ The only time I was confident someone was guilty was when they would show their face in a video, taking pride in the crime.”

Of the 150 cases Downey prosecuted, 47 resulted in convictions, but only about 10 were based on video evidence.

Downey complained from day one about the structure of the courts, taking her fight all the way up the ladder to “the highest gunslingers” in the military. “This is just the way we do it here,” was their response, in the same breath telling her, “the rule of law, that’s what it’s all about.” 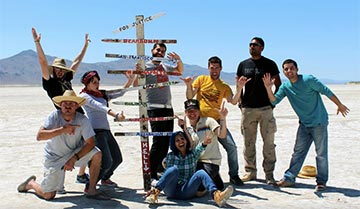 Members of the cast and crew take to the desert for filming.

The military had to maintain their heroic image, Downey says, by prosecuting everyone, and even letting certain people go if it helped deter bad publicity.

“I was told to drop one case,” she says, “about a 14-year-old girl who was caught preparing to assault American soldiers with an AK47.”

The idea of a young, innocent Iraqi girl turning against American soldiers, “was not something they wanted on the news.” So Maj. Downey let her go.

“She vanished. So later on in life when I met a man whose buddy had been blown up by a young girl, I wondered if that was the same girl I was forced to let go.”

Beyond the fact that verdicts were being made without evidence, Downey grasped something much deeper was going on between the American military and the people of Iraq.

“There was a large portion of Iraqis who felt the Americans were committing crimes against humanity,” Downey says. And after 6 months, the stories all began to sound the same.

“They violated my country.”

“I was herding my sheep and they put a hood on me.”

“They blew up my home, and my family.”

And Downey knew their stories to be true.

“We bombed the s*** out of them,” she says, recalling a vivid image of Saddam Hussein’s bunker palace blown to pieces.

“I became a lawyer to pursue justice, and my government sent me to a country, and we faked justice,” Downey says of her time in Iraq. And after witnessing 6 months of injustice, Downey’s return to the United States was not an easy one. Yet in the midst of the mental and physical anguish she faced, her life’s calling never wavered. Where she once sought justice in courtroom, she now seeks it through film.

Forgive Me Father is a riveting story that raises many of the complicated questions American soldiers and anti-American terrorists have yet to answer. What compels combatants, once innocent civilians, to develop such deep hatred toward one another, and is there an end in sight?

Downey has several other films in the pipeline, and every single one of them will take on injustice.

“At the root of all evil is injustice, period.”